Bizunesh not only wants her coffee but also that her children be educated and go down the mountains and the harsh life of survival.  To have this, and enough to eat all year, is a big dream in the Ethiopian mountains. It requires that she and Belay work together as a team. And they have done so from the beginning.

The parents drop out too

The school director is cynical and sarcastic. He has heard too many children say they want to learn and too many parents say they want to educate their children. From the 161 boys and 140 girls that begin grade one only 30 boys and 13 girls will attend grade eight. So he does not believe Demelesh will finish his education. The biggest drop out rate is after grade one and grade two. “The peasants say they want to educate their children but they do not follow up on their word or desire,” he says. The parents drop out, too, keeping their children home to work. Easy divorce, single-women households, early deaths of parents from disease and war means children are needed in the fields or as cattle-keepers. 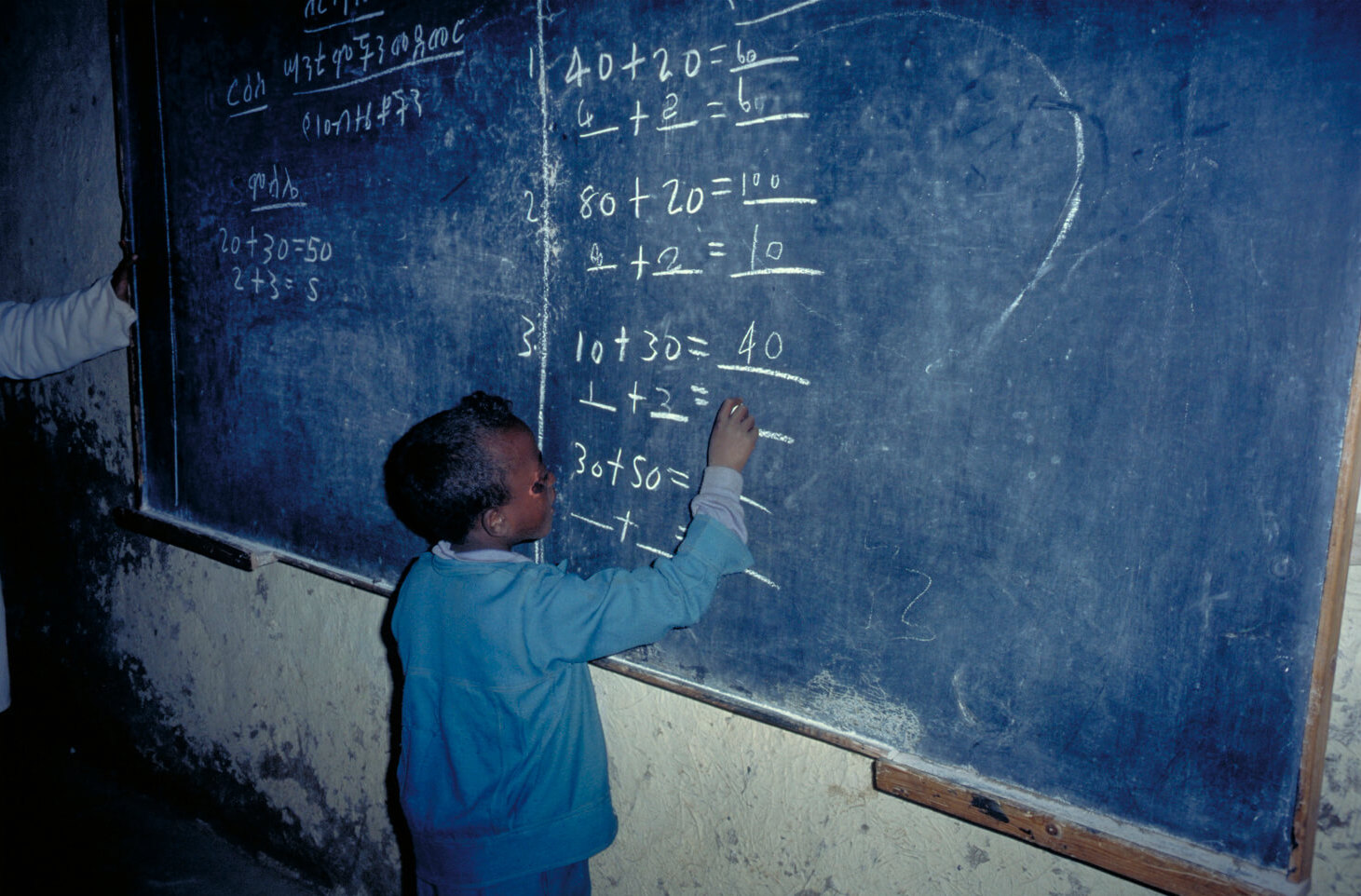 In first grade from 6 to 16 years old

There are only four classes for the 300 children of grade one. Demelesh squeezes into the middle of two boys in the third row. Around him more than 60 children crowd the small school benches. Their ages vary from six to 16. The math lesson begins. “I like to learn,” Demelesh says. His young sister, Wenynishet, does not really want to go.

Dreaming to see the children out of the mountains

The long distances and the fact that so many get abducted and raped on their way to school means that the girls are the first to be kept home. It’s only because her village was a short, 15-minute walk from school that Bizunesh has had the privilege, by the time she was 18, to be given five years of schooling. Then her father died and education was over. She had also met Belay and school benches held no more attraction for her anyway. But she says that it is because she was in school that she got married so late and not at 13 as many other girls.

Belay was not so lucky. “My parents did not understand the importance of education, they only believed in the church education.” He has never seen the school benches but he agrees with Bizunesh on the efforts that must be made for his own children. There will not be enough land for them and he dreams of seeing them get out of the mountains. And when he admits to his biggest dreams, Belay says he would like one day for his children to go to America. He thinks this dream is possible. Though his mother chose to stay in the mountains, some of his grandfather’s other children have made their way to the Addis Ababa!

The boy would do anything to please his mother

In class, Demelash listens and keeps on walking silently. He speaks little and does what he has to do, as if he knows secretly where his own path is bringing him. Maybe all he hears is his mother’s voice. “I will do everything to assure my children’s education.” The small boy will do anything to please his mother. He also looks forward to Teshome joining him on this walk to school. (read more….)